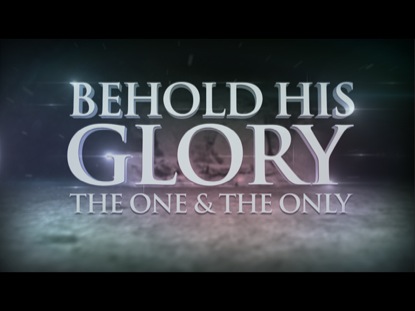 Did you know that Jesus wants us to glory in His glory? The first usage of glory is as a verb, meaning “to exult with triumph; rejoice proudly.” The second usage of glory is as a noun, meaning “very great praise, honor, or distinction, fame or admiration.” We glory in the glory of our Savior. What is the Lord’s glory? It is the same glory with which we behold God the Father, and it has been revealed to us through Christ:

“And the Word became flesh and dwelt among us, and we beheld His glory, the glory as of the only begotten of the Father, full of grace and truth.” (John 1:14)

Understanding that Jesus’ glory is that of God the Father could be a difficult concept to grasp, however Jesus made sure that He left us an understanding of that glory. Why would He do so? First, He knew it would be controversial, nay blasphemous to equate Himself with God. It was an offense worthy of stoning. Second, He knew many scoffers would reject such a notion, that a mere mortal man could be equal to God. Nevertheless, Christ clearly and openly declared that:

“I have glorified You on the earth. I have finished the work which You have given Me to do. And now, O Father, glorify Me together with Yourself, with the glory which I had with You before the world was.” (John 17:4-5)

You may be reading this and not yet seen Jesus’ desire for us to glory in His glory. We’ve read of the ancestry and equality of Christ’s glory as it relates to God the Father’s glory, but where do we find Christ’s expectancy of our glorying in His glory?

“Father, I desire that they also whom You gave Me may be with Me where I am, that they may behold My glory which You have given Me; for You loved Me before the foundation of the world.” (John 17:24)

Why would God not allow anyone to see His face? It is because He knew one day man would see His face in His Son Jesus Christ. Jesus Christ was and is to be exalted above all men and we are to glory in His glory:

“For this One has been counted worthy of more glory than Moses, inasmuch as He who built the house has more honor than the house.” (Hebrews 3:3)

God also knew that when He transfigured His Son, Jesus’ inner circle of Peter, James, and John would be the first men to truly see the glory of Christ. These men would not only see Christ glorified and magnified by God the Father, but they would also see manifestations of Elijah and Moses:

“But Peter and those with him were heavy with sleep; and when they were fully awake, they saw His glory and the two men who stood with Him.” (Luke 9:32)

While we can glory in the glory of Jesus Christ, the true manifestation of Christ’s glory will not be fully revealed until His Second Coming, when He will come in the full glory of His Father to reward those who have followed Him:

“For the Son of Man will come in the glory of His Father with His angels, and then He will reward each according to his works.” (Matthew 16:27)

So why should you glory in the glory of Christ? Jesus Christ is the manifestation of God’s glory, full of grace and truth. In Him we find the answers to life as is revealed in His life through the Holy Bible.

Do you know Him?

Have you met Him?

If you’re receiving these devotionals for the first time and would like to receive them on a regular basis, please email me at jeffers221@bellsouth.net and use “Please add to Devotional List” as the subject. You can purchase Dave’s five devotional books by visiting his Amazon author page.